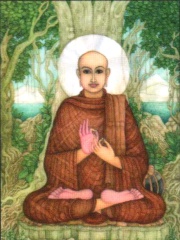 Śāriputra (Sanskrit: शारिपुत्र; Tibetan: ཤཱ་རིའི་བུ་, Pali: Sāriputta, lit. "the son of Śāri", born Upatiṣya, Pali: Upatissa) was one of the top disciples of the Buddha. He is considered the first of the Buddha's two chief male disciples, together with Maudgalyāyana (Pali: Moggallāna). Read more on Wikipedia

Since 2007, the English Wikipedia page of Sariputta has received more than 173,959 page views. His biography is available in 32 different languages on Wikipedia making him the 1,240th most popular politician.

Page views of Sariputtas by language

Among politicians, Sariputta ranks 1,234 out of 14,801. Before him are Seti II, Crazy Horse, Millard Fillmore, Chulalongkorn, Eleftherios Venizelos, and Ur-Nammu. After him are Henry I, Duke of Guise, Ludwig III of Bavaria, Mohammed V of Morocco, Cyrus the Younger, Walther Funk, and Akbar Hashemi Rafsanjani.

Others Deceased in 484 BC