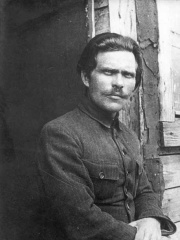 Nestor Ivanovych Makhno (Ukrainian: Не́стор Івáнович Махно́, [ˈnɛstor iˈwɑnowɪtʃ mɐxˈnɔ]; November 8 [O.S. October 27] 1888 – July 25, 1934), also known as Bat'ko Makhno (Ukrainian: Бáтько Махно́; [ˈbɑtʲko mɐxˈnɔ], "Father Makhno"), was a Ukrainian anarchist revolutionary and the commander of the Revolutionary Insurgent Army of Ukraine from 1917 to 1921. Makhno was the namesake of the Makhnovshchina (loosely translated as "Makhno movement"), a predominantly peasant phenomenon that grew into a mass social movement. It was initially centered around Makhno's hometown Huliaipole but over the course of the Russian Civil War came to exert a strong influence over large areas of southern Ukraine. Read more on Wikipedia

Nestor Makhno was a Ukrainian anarchist who led a guerrilla campaign against the Bolshevik Red Army in the Ukraine in 1918-1921.