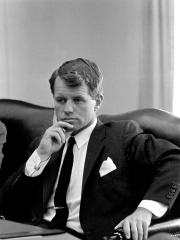 Robert Francis Kennedy (November 20, 1925 – June 6, 1968), also known by his initials RFK and by the nickname Bobby, was an American lawyer and politician who served as the 64th United States Attorney General from January 1961 to September 1964, and as a U.S. Senator from New York from January 1965 until his assassination in June 1968. He was, like his brothers John and Edward, a prominent member of the Democratic Party and has come to be viewed by some historians as an icon of modern American liberalism.Kennedy was born into a wealthy, political family in Brookline, Massachusetts. After serving in the U.S. Naval Reserve from 1944 to 1946, Kennedy returned to his studies at Harvard University, and later received his law degree from the University of Virginia. He began his career as a correspondent for The Boston Post and as a lawyer at the Justice Department, but later resigned to manage his brother John's successful campaign for the U.S. Read more on Wikipedia

Robert F. Kennedy was the younger brother of President John F. Kennedy. He was a U.S. Senator and a presidential candidate. He was assassinated at the Ambassador Hotel in Los Angeles, California on June 5, 1968, while campaigning for the presidency.

Among politicians, Robert F. Kennedy ranks 814 out of 15,577. Before him are Arthur Henderson, Eduard Bernstein, Ferdinand VII of Spain, Wilhelm Frick, Pedro I of Brazil, and Justin Trudeau. After him are Édouard Daladier, Dilma Rousseff, Carol II of Romania, Liu Shaoqi, Feodor III of Russia, and Tamar of Georgia.