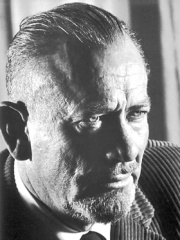 John Ernst Steinbeck Jr. (; February 27, 1902 – December 20, 1968) was an American writer and the 1962 Nobel Prize in Literature winner "for his realistic and imaginative writings, combining as they do sympathetic humor and keen social perception." He has been called "a giant of American letters."During his writing career, he authored 33 books, with one book coauthored alongside Edward Ricketts, including 16 novels, six non-fiction books, and two collections of short stories. He is widely known for the comic novels Tortilla Flat (1935) and Cannery Row (1945), the multi-generation epic East of Eden (1952), and the novellas The Red Pony (1933) and Of Mice and Men (1937). Read more on Wikipedia

John Steinbeck is most famous for writing the Pulitzer Prize-winning novel The Grapes of Wrath.

Among writers, John Steinbeck ranks 186 out of 5,755. Before him are John the Evangelist, Juvenal, Mansur Al-Hallaj, Georges Simenon, Sigrid Undset, and François-René de Chateaubriand. After him are Orhan Pamuk, Mario Vargas Llosa, Svetlana Alexievich, Quintilian, Snorri Sturluson, and Terence.