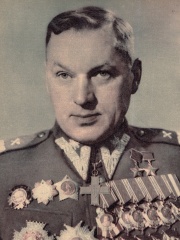 Konstantin Konstantinovich (Xaverevich) Rokossovsky (Russian: Константин Константинович Рокоссовский; Polish: Konstanty Rokossowski; 21 December 1896 – 3 August 1968) was a Soviet and Polish officer who became Marshal of the Soviet Union, Marshal of Poland, and served as Poland's Defence Minister from 1949 until his removal in 1956 during the Polish October. He was among the most prominent Red Army commanders of World War II. Born in Congress Poland under Russian rule, Rokossovsky served in the Imperial Russian Army during World War I. After the war he joined the Red Army and fought with great distinction during the Russian Civil War. Read more on Wikipedia

Since 2007, the English Wikipedia page of Konstantin Rokossovsky has received more than 727,543 page views. His biography is available in 54 different languages on Wikipedia making him the 82nd most popular military personnel.