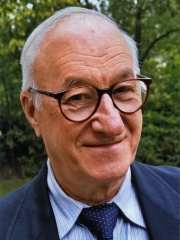 Albert Bandura (; December 4, 1925 – July 26, 2021) was a Canadian-American psychologist who was the David Starr Jordan Professor in Psychology at Stanford University.Bandura was responsible for contributions to the field of education and to several fields of psychology, including social cognitive theory, therapy, and personality psychology, and was also of influence in the transition between behaviorism and cognitive psychology. He is known as the originator of social learning theory (renamed the social cognitive theory) and the theoretical construct of self-efficacy, and is also responsible for the influential 1961 Bobo doll experiment. This Bobo doll experiment demonstrated the concept of observational learning. A 2002 survey ranked Bandura as the fourth most-frequently cited psychologist of all time, behind B. F. Read more on Wikipedia

Albert Bandura is most famous for his social learning theory. This theory states that people learn from observing others and then imitate the behaviors they see.

Among psychologists, Albert Bandura ranks 16 out of 183. Before him are Jacques Lacan, William James, Erik Erikson, Viktor Frankl, Carl Rogers, and Gustave Le Bon. After him are John B. Watson, Kurt Lewin, B. F. Skinner, Edward Thorndike, Melanie Klein, and Anna Freud.

Among PSYCHOLOGISTS In Canada