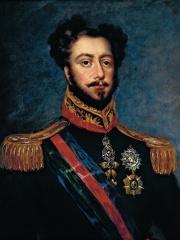 Pedro I of Brazil

Dom Pedro I (English: Peter I; 12 October 1798 – 24 September 1834), nicknamed "the Liberator", was the founder and first ruler of the Empire of Brazil. As King Dom Pedro IV, he reigned briefly over Portugal, where he also became known as "the Liberator" as well as "the Soldier King". Born in Lisbon, Pedro I was the fourth child of King Dom João VI of Portugal and Queen Carlota Joaquina, and thus a member of the House of Braganza. Read more on Wikipedia

Since 2007, the English Wikipedia page of Pedro I of Brazil has received more than 1,420,978 page views. His biography is available in 63 different languages on Wikipedia making him the 746th most popular politician.

Page views of Pedro I of Brazils by language

Among politicians, Pedro I of Brazil ranks 741 out of 14,801. Before him are Charles I of Hungary, James I of Aragon, Gaius Cassius Longinus, Isabella II of Spain, Augustus III of Poland, and Stepan Bandera. After him are Andromache, John the Fearless, John III of Sweden, Turgut Özal, Manuel II Palaiologos, and Marcian.