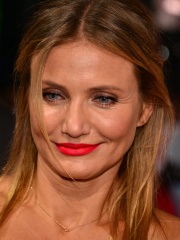 Cameron Michelle Diaz (born August 30, 1972) is an American entrepreneur, producer, author, and retired actress and model. The recipient of several accolades, including nominations for four Golden Globe Awards, a BAFTA Award and three Screen Actors Guild Awards, and a star on the Hollywood Walk of Fame, she was named the highest-paid Hollywood actress over 40 in 2013. As of 2018, the U.S. domestic box office grosses of Diaz's films total over US$3 billion, with worldwide grosses surpassing US$7 billion, making her the fifth highest-grossing U.S. domestic box office actress.Born in San Diego, California, Diaz was raised in Long Beach. Read more on Wikipedia

Cameron Diaz is most famous for her roles in the Charlie's Angels movies, There's Something About Mary, and My Best Friend's Wedding.

Among people born in 1972, Cameron Diaz ranks 3. Before her are Zinedine Zidane and Gwyneth Paltrow. After her are Eminem, Ben Affleck, Shaquille O'Neal, The Notorious B.I.G., Dwayne Johnson, Wentworth Miller, Rivaldo, Jude Law, and Big Show.