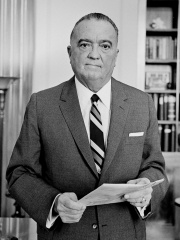 John Edgar Hoover (January 1, 1895 – May 2, 1972) was an American law enforcement administrator who served as the first Director of the Federal Bureau of Investigation (FBI) of the United States. He was appointed director of the Bureau of Investigation – the FBI's predecessor – in 1924 and was instrumental in founding the FBI in 1935, where he remained director for another 37 years until his death in 1972 at the age of 77. Hoover built the FBI into a larger crime-fighting agency than it was at its inception and instituted a number of modernizations to police technology, such as a centralized fingerprint file and forensic laboratories. Read more on Wikipedia

J. Edgar Hoover was the director of the FBI for nearly 50 years. He is most famous for his role in the FBI's fight against crime and communism.

Among lawyers, J. Edgar Hoover ranks 3 out of 67. Before him are Hugo Grotius and Al-Shafi‘i. After him are Carlo Buonaparte, Louis Renault, Gaius, Charles Albert Gobat, Al-Nawawi, Henri La Fontaine, Aemilius Papinianus, Ulpian, and Tobias Asser.