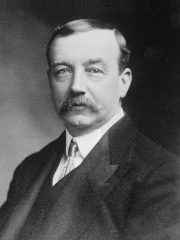 Arthur Henderson (13 September 1863 – 20 October 1935) was a British iron moulder and Labour politician. He was the first Labour cabinet minister, won the Nobel Peace Prize in 1934 and, uniquely, served three separate terms as Leader of the Labour Party in three different decades. He was popular among his colleagues, who called him "Uncle Arthur" in acknowledgement of his integrity, his devotion to the cause and his imperturbability. Read more on Wikipedia

Arthur Henderson was a British Labour politician who served as the first Labour Secretary of State for Foreign Affairs from 1924 to 1929.

Among politicians, Arthur Henderson ranks 808 out of 15,577. Before him are Charles II of England, Stanisław August Poniatowski, Paul of Greece, Valentinian I, Christian X of Denmark, and Ecgberht, King of Wessex. After him are Eduard Bernstein, Ferdinand VII of Spain, Wilhelm Frick, Pedro I of Brazil, Justin Trudeau, and Robert F. Kennedy.