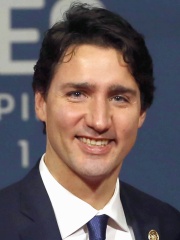 Justin Pierre James Trudeau ( (listen) TROO-doh, troo-DOH, French: [ʒystɛ̃ pjɛʁ ʒam tʁydo]; born December 25, 1971) is a Canadian politician who is the 23rd and current prime minister of Canada since 2015 and the leader of the Liberal Party since 2013. Trudeau is the second-youngest prime minister in Canadian history after Joe Clark; he is also the first to be the child or other relative of a previous holder of the post, as the eldest son of Pierre Trudeau. Born in Ottawa, Trudeau attended Collège Jean-de-Brébeuf, graduated from McGill University in 1994 with a Bachelor of Arts degree in literature, then in 1998 acquired a Bachelor of Education degree from the University of British Columbia. Read more on Wikipedia

Justin Trudeau is most famous for being the Prime Minister of Canada.

Among politicians, Justin Trudeau ranks 813 out of 15,577. Before him are Ecgberht, King of Wessex, Arthur Henderson, Eduard Bernstein, Ferdinand VII of Spain, Wilhelm Frick, and Pedro I of Brazil. After him are Robert F. Kennedy, Édouard Daladier, Dilma Rousseff, Carol II of Romania, Liu Shaoqi, and Feodor III of Russia.