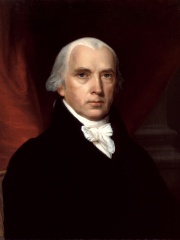 James Madison was a Founding Father and the fourth president of the United States. He is most famous for being one of the authors of the Constitution, and for being the father of the Bill of Rights.

Among politicians, James Madison ranks 1,019 out of 15,710. Before him are Nabonidus, B. R. Ambedkar, John I of Portugal, Hamid Karzai, Yazdegerd III, and Joachim Gauck. After him are Shaka, Sebastian of Portugal, Mohammad Mosaddegh, Cleopatra Selene II, Édouard Daladier, and Agrippina the Elder.

Among people born in 1751, James Madison ranks 3. Before him are Maria Anna Mozart and Ferdinand I of the Two Sicilies. After him are Caroline Matilda of Great Britain, Maria Luisa of Parma, Archduchess Maria Josepha of Austria, Ferdinand, Duke of Parma, Emanuel Schikaneder, Charles Emmanuel IV of Sardinia, Dmitry Bortniansky, Wilhelmina of Prussia, Princess of Orange, and George Shaw. Among people deceased in 1836, James Madison ranks 4. Before him are André-Marie Ampère, Charles X of France, and Emmanuel Joseph Sieyès. After him are Letizia Ramolino, Claude Joseph Rouget de Lisle, William Godwin, Davy Crockett, Maria Malibran, Princess Wilhelmine of Baden, Claude-Louis Navier, and Antoine Laurent de Jussieu.