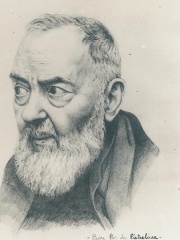 Padre Pio, also known as Saint Pius of Pietrelcina (Italian: Pio da Pietrelcina; 25 May 1887 – 23 September 1968), was an Italian Franciscan Capuchin, friar, priest, stigmatist, and mystic, now venerated as a saint in the Catholic Church. Born Francesco Forgione, he was given the name of Pius (Italian: Pio) when he joined the Order of Friars Minor Capuchin. Padre Pio became famous for exhibiting stigmata for most of his life, thereby generating much interest and controversy. Read more on Wikipedia

Since 2007, the English Wikipedia page of Padre Pio has received more than 3,024,199 page views. His biography is available in 45 different languages on Wikipedia. Padre Pio is the 174th most popular religious figure (up from 187th in 2019), the 212th most popular biography from Italy (up from 221st in 2019) and the 68th most popular Italian Religious Figure.

Padre Pio is most famous for his stigmata. He was a Catholic priest who received the wounds of Christ's crucifixion in his hands, feet, and side.