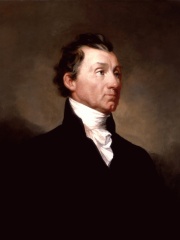 James Monroe ( mən-ROH; April 28, 1758 – July 4, 1831) was an American statesman, lawyer, diplomat and Founding Father who served as the fifth president of the United States from 1817 to 1825. A member of the Democratic-Republican Party, Monroe was the last president of the Virginia dynasty and the Republican Generation; his presidency coincided with the Era of Good Feelings, concluding the First Party System era of American politics. He is perhaps best known for issuing the Monroe Doctrine, a policy of opposing European colonialism in the Americas while effectively asserting U.S. dominance, empire, and hegemony in the hemisphere. He also served as governor of Virginia, a member of the United States Senate, U.S. Read more on Wikipedia

James Monroe is most famous for being the fifth president of the United States. He was also a diplomat, soldier, and Secretary of State.

Among politicians, James Monroe ranks 726 out of 15,710. Before him are Cosimo I de' Medici, Grand Duke of Tuscany, Shunzhi Emperor, Ptolemy XIII Theos Philopator, Turhan Hatice Sultan, Archduke Franz Karl of Austria, and Cao Pi. After him are Wilhelm, German Crown Prince, Chlothar I, Marcus Aemilius Lepidus, Alexandra of Denmark, John the Fearless, and Hussein of Jordan.