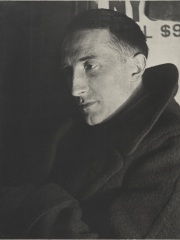 Henri-Robert-Marcel Duchamp (; French: [maʁsɛl dyʃɑ̃]; 28 July 1887 – 2 October 1968) was a French-American painter, sculptor, chess player, and writer whose work is associated with Cubism, Dada, and conceptual art. He was careful about his use of the term Dada and was not directly associated with Dada groups. Duchamp is commonly regarded, along with Pablo Picasso and Henri Matisse, as one of the three artists who helped to define the revolutionary developments in the plastic arts in the opening decades of the 20th century, responsible for significant developments in painting and sculpture. Read more on Wikipedia

Since 2007, the English Wikipedia page of Marcel Duchamp has received more than 2,393,927 page views. His biography is available in 70 different languages on Wikipedia making him the 3rd most popular artist.

Among artists, Marcel Duchamp ranks 3 out of 61. Before him are Hokusai and Andy Warhol. After him are Yoko Ono, M. C. Escher, Jean Arp, Jusepe de Ribera, Roy Lichtenstein, Victor Vasarely, Joseph Beuys, Yves Klein, and Hans Holbein the Younger.

Among ARTISTS In France