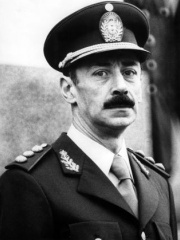 Jorge Rafael Videla (; Spanish: [ˈxoɾxe rafaˈel biˈðela]; 2 August 1925 – 17 May 2013) was an Argentine military officer and dictator, Commander in Chief of the Army, member of the Military Junta, and de facto President of Argentina from 29 March 1976 to 29 March 1981. His reign, which was during the time of Operation Condor, was among the most infamous in Latin America during the Cold War, due to its high level of human rights abuses and severe economic mismanagement. He came to power in a coup d'état that deposed Isabel Perón. Read more on Wikipedia

Jorge Rafael Videla is most famous for being the president of Argentina from 1976 to 1981, during which time he was responsible for the Dirty War, a military dictatorship that resulted in the disappearance of 30,000 Argentinians.

Among politicians, Jorge Rafael Videla ranks 1,012 out of 15,577. Before him are Khalifa bin Zayed Al Nahyan, Ptolemy VI Philometor, John II of Portugal, Ælfweard of Wessex, Empress Gi, and Clara Petacci. After him are Haakon VII of Norway, Berke, Tokhtamysh, Jiaqing Emperor, Archduchess Sophie of Austria, and Mary, Queen of Hungary.