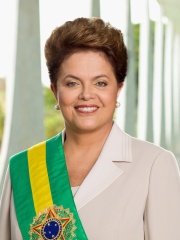 Dilma Vana Rousseff (Brazilian Portuguese: [ˈdʒiwmɐ ˈvɐ̃nɐ ʁuˈsɛf(i)]; Bulgarian: Дилма Вана Русеф; born 14 December 1947) is a Brazilian economist and politician who served as the 36th president of Brazil, holding the position from 2011 until her impeachment and removal from office on 31 August 2016. She was the first woman to hold the Brazilian presidency and had previously served as Chief of Staff to former president Luiz Inácio Lula da Silva from 2005 to 2010.The daughter of a Bulgarian immigrant, Rousseff was raised in an upper middle class household in Belo Horizonte. She became a socialist in her youth and after the 1964 coup d'état joined left-wing and Marxist urban guerrilla groups that fought against the military dictatorship. Read more on Wikipedia

In 2011, Dilma Rousseff became the first woman to be elected president of Brazil. She was re-elected in 2014.