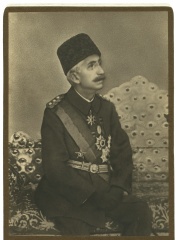 Mehmed VI Vahideddin (Ottoman Turkish: محمد سادس‎ Meḥmed-i sâdis or وحيد الدين‎ Vahîdeddin; Turkish: VI. Mehmed or Vahdeddin; 14 January 1861 – 16 May 1926), also known as Şahbaba (lit. 'Emperor-father') among the Osmanoğlu family, was the 36th and last Sultan of the Ottoman Empire, reigning from 4 July 1918 until 1 November, 1922, when the Ottoman Empire was dissolved after World War I and replaced by the Republic of Turkey on 29 October 1923. The brother of Mehmed V, he became heir to the throne in 1916, after the suicide of Abdülaziz's son, Şehzade Yusuf Izzeddin, as the eldest male member of the House of Osman. He acceded to the throne after the death of Mehmed V. He was girded with the Sword of Osman on 4 July 1918 as the thirty-sixth padishah. Read more on Wikipedia

Among politicians, Mehmed VI ranks 247 out of 15,710. Before him are Charles the Bald, Enver Hoxha, Louis XII of France, Alexander III of Russia, Paul I of Russia, and Godfrey of Bouillon. After him are Charles VII of France, Ferdinand II, Holy Roman Emperor, Pargalı Ibrahim Pasha, Francis I, Holy Roman Emperor, Georges Danton, and Edward III of England.