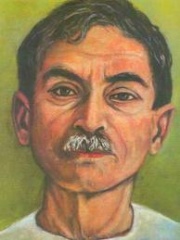 Dhanpat Rai Srivastava (31 July 1880 — 8 October 1936), better known by his pen name Munshi Premchand (pronounced [mʊnʃiː preːm t͡ʃənd̪] (listen), was an Indian writer famous for his modern Hindustani literature. He is one of the most celebrated writers of the Indian subcontinent, and is regarded as one of the foremost Hindi writers of the early twentieth century. His novels include Godaan, Karmabhoomi, Gaban, Mansarovar, Idgah. Read more on Wikipedia

Premchand is most famous for his novel, "Godan," which is a social and moral critique of the exploitation of the rural poor.

Page views of Premchands by language

Among writers, Premchand ranks 623 out of 5,794. Before him are Antoine François Prévost, Luis Sepúlveda, Louise Hay, Giacomo Leopardi, Marcus Gavius Apicius, and Pierre Loti. After him are Tatian, Persius, Geoffrey of Monmouth, Kumārajīva, Ulrich von Hutten, and Rudaki.