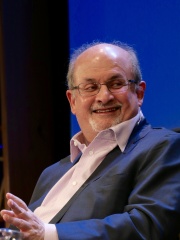 Sir Ahmed Salman Rushdie (born 19 June 1947) is a British-American novelist and essayist of Indian descent. His work, combining magical realism with historical fiction, is primarily concerned with the many connections, disruptions, and migrations between Eastern and Western civilizations, with much of his fiction being set on the Indian subcontinent. His second novel, Midnight's Children (1981), won the Booker Prize in 1981 and was deemed to be "the best novel of all winners" on two occasions, marking the 25th and the 40th anniversary of the prize. Read more on Wikipedia

Salman Rushdie is most famous for his controversial novel The Satanic Verses. The book was condemned by the Ayatollah Khomeini, and Rushdie was forced into hiding.

Among writers, Salman Rushdie ranks 542 out of 5,794. Before him are Ivan Bunin, Luo Guanzhong, Yevgeny Zamyatin, Arthur Koestler, Bohumil Hrabal, and Giuseppe Tomasi di Lampedusa. After him are Al-Maʿarri, A. J. Cronin, Frantz Fanon, Appius Claudius Caecus, William of Rubruck, and Georg Trakl.