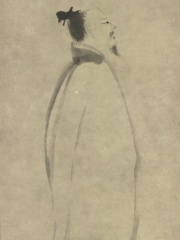 Li Bai (Chinese: 李白; pinyin: Lǐ Bái, 701–762), also known as Li Bo, courtesy name Taibai (Chinese: 太白), was a Chinese poet, acclaimed from his own time to the present as a brilliant and romantic figure who took traditional poetic forms to new heights. He and his friend Du Fu (712–770) were two of the most prominent figures in the flourishing of Chinese poetry in the Tang dynasty, which is often called the "Golden Age of Chinese Poetry". The expression "Three Wonders" denotes Li Bai's poetry, Pei Min's swordplay, and Zhang Xu's calligraphy.Around 1000 poems attributed to Li are extant. Read more on Wikipedia

Li bai is most famous for being a poet who was born in the Tang Dynasty and was well known for his poems about the natural world.

Others born in Kyrgyzstan

Among WRITERS In Kyrgyzstan

Among writers born in Kyrgyzstan, Li Bai ranks 1. After him are Chinghiz Aitmatov (1928) and Alykul Osmonov (1915).