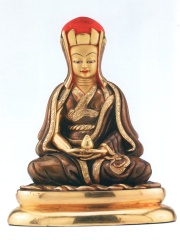 Gampopa Sönam Rinchen (Tibetan: སྒམ་པོ་པ་བསོད་ནམས་རིན་ཆེན་, Wylie: sgam po pa bsod nams rin chen, 1079–1153) was the main student of Milarepa, and a Tibetan Buddhist master who codified his own master's ascetic teachings, which form the foundation of the Kagyu educational tradition. Gampopa was also a doctor and tantric master. He authored the first Lamrim text, Jewel Ornament of Liberation, and founded the Dagpo Kagyu school. Read more on Wikipedia

Page views of Gampopas by language

Among people born in 1079, Gampopa ranks 4. Before him are Peter Abelard, Kilij Arslan I, and Judah Halevi. After him are Yejong of Goryeo and Emperor Horikawa. Among people deceased in 1153, Gampopa ranks 6. Before him are Bernard of Clairvaux, Pope Eugene III, Anna Komnene, David I of Scotland, and Bernard de Tremelay. After him are Al-Shahrastani and Eustace IV, Count of Boulogne.