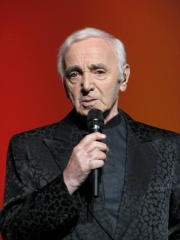 Charles Aznavour ( AZ-nə-VOOR, French: [ʃaʁl aznavuʁ]; born Shahnour Vaghinag Aznavourian, Armenian: Շահնուր Վաղինակ Ազնավուրեան, Shahnur Vaghinak Aznavuryan; 22 May 1924 – 1 October 2018) was a French-Armenian singer, lyricist, actor and diplomat. Aznavour was known for his distinctive vibrato tenor voice: clear and ringing in its upper reaches, with gravelly and profound low notes. In a career as a composer, singer and songwriter, spanning over 70 years, he recorded more than 1,200 songs interpreted in 9 languages. Read more on Wikipedia

Charles Aznavour is a French-Armenian singer, songwriter, and actor. He was born in Paris to Armenian parents who had fled the Armenian Genocide. He became one of France's most popular and enduring singers. Aznavour's voice is shaded towards the tenor range. He has recorded over 1,200 songs in multiple languages, including French, English, Spanish, German, Italian, Russian, and Turkish. Aznavour is known for his unique tenor voice, which has been described as being a "light tenor".