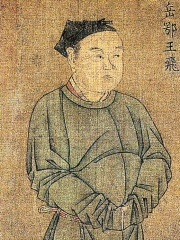 Yue Fei (Chinese: 岳飛; March 24, 1103 – January 28, 1142), courtesy name Pengju (鵬舉) was a Chinese military general who lived during the Southern Song dynasty and considered a national hero of China, known for leading Southern Song forces in the wars in the 12th century between Southern Song and the Jurchen-ruled Jin dynasty in northern China. Because of his warlike stance, he was put to death by the Southern Song government in 1142 under a concocted charge, after a negotiated peace was achieved with the Jurchens. Read more on Wikipedia

Since 2007, the English Wikipedia page of Yue Fei has received more than 815,671 page views. His biography is available in 26 different languages on Wikipedia. Yue Fei is the 187th most popular military personnel (up from 210th in 2019), the 115th most popular biography from China (up from 126th in 2019) and the 8th most popular Chinese Military Personnel.

Among people born in 1142, Yue Fei ranks 1. After him are Moinuddin Chishti, William the Lion, Philip I, Count of Flanders, Hugh III, Duke of Burgundy, Frederick, Duke of Bohemia, Al-Mustadi, and Godfrey III, Count of Louvain. Among people deceased in 1142, Yue Fei ranks 2. Before him is Peter Abelard. After him are Alexios Komnenos, Orderic Vitalis, Godfrey II, Count of Louvain, and Andronikos Komnenos.