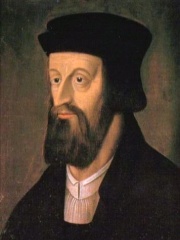 Jan Hus (; Czech: [ˈjan ˈɦus] (listen); c. 1372 – 6 July 1415), sometimes anglicized as John Hus or John Huss, and referred to in historical texts as Iohannes Hus or Johannes Huss, was a Czech theologian and philosopher who became a Church reformer and the inspiration of Hussitism, a key predecessor to Protestantism and a seminal figure in the Bohemian Reformation. After John Wycliffe, the theorist of ecclesiastical reform, Hus is considered the second Church reformer, as he lived before Luther, Calvin and Zwingli. His teachings had a strong influence on the states of Western Europe, most immediately in the approval of a reformed Bohemian religious denomination and, over a century later, on Martin Luther. Read more on Wikipedia

Since 2007, the English Wikipedia page of Jan Hus has received more than 1,729,257 page views. His biography is available in 75 different languages on Wikipedia (up from 71 in 2019). Jan Hus is the 6th most popular social activist, the 4th most popular biography from Czechia (down from 1st in 2019) and the most popular Czech Social Activist.

Jan Hus was a Czech priest and university professor who preached reform of the Catholic Church. He was burned at the stake for heresy in 1415.

Among SOCIAL ACTIVISTS In Czechia