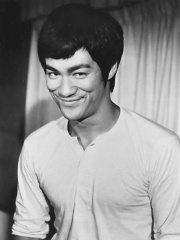 Lee Jun-fan (Chinese: 李振藩; November 27, 1940 – July 20, 1973), known professionally as Bruce Lee (Chinese: 李小龍), was a Chinese American actor, director, martial artist, martial arts instructor, and philosopher. He was the founder of Jeet Kune Do, a hybrid martial arts philosophy drawing from different combat disciplines that is often credited with paving the way for modern mixed martial arts (MMA). Lee is considered by commentators, critics, media, and other martial artists to be the most influential martial artist of all time and a pop culture icon of the 20th century, who bridged the gap between East and West. Read more on Wikipedia

Since 2007, the English Wikipedia page of Bruce Lee has received more than 28,397,765 page views. His biography is available in 111 different languages on Wikipedia making him the 4th most popular actor.

GeekTyrant
Trailer for the Bruce Lee Documentary BE WATER From ESPN's 30 FOR 30
ESPN’s 30 For 30 documentary film series is finally diving into the world of martial arts with the legendary Bruce Lee! The film is titled Be Water, and it will explore and celebrate the life of one of the greatest martial artists that has ever lived. I’ve be…
Joey Paur
Engadget
What's on TV this week: 'Jaws' 4K, Bruce Lee and 'The Outer Worlds'
This week, after the launch of Valorant on PC, gamers can get a taste of The Outer Worlds on Switch as well as new eco-friendly DLC for The Sims 4. While Outer Worlds was slightly delayed due to the coronavirus pandemic, a port is ready to go this we...
Richard Lawler
ABC News
New this week: Apollo benefit, docs on Bruce Lee, spelling
This week’s new entertainment releases include documentaries on Bruce Lee and Lin-Manuel Miranda
The Associated Press
ESPN
'Be Water': How to watch and stream ESPN's Bruce Lee documentary
Bruce Lee became a cinematic icon, but those who were close to him say that wasn't his greatest contribution to society.
ESPN

Among actors, Bruce Lee ranks 4 out of 8,832. Before him are Charlie Chaplin, Marilyn Monroe, and Sylvester Stallone. After him are Alain Delon, Audrey Hepburn, Cher, Clint Eastwood, Brigitte Bardot, Marlene Dietrich, Al Pacino, and Marlon Brando.