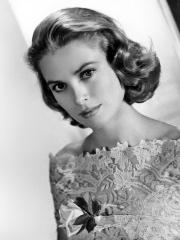 Grace Patricia Kelly (November 12, 1929 – September 14, 1982) was an American film actress who, after starring in several significant films in the early to mid-1950s, became Princess of Monaco by marrying Prince Rainier III in April 1956. After graduating from the American Academy of Dramatic Arts in 1949, Kelly appeared in New York City theatrical productions and more than 40 episodes of live drama productions broadcast during the early 1950s Golden Age of Television. In October 1953, she gained stardom from her performance in director John Ford's African-filmed adventure-romance Mogambo, starring Clark Gable and Ava Gardner, which won her a Golden Globe Award and an Academy Award nomination for Best Supporting Actress. Read more on Wikipedia

Since 2007, the English Wikipedia page of Grace Kelly has received more than 14,375,586 page views. Her biography is available in 86 different languages on Wikipedia making her the 48th most popular actor.