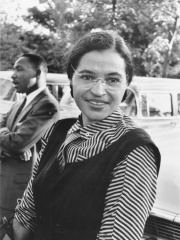 Rosa Louise McCauley Parks (February 4, 1913 – October 24, 2005) was an American activist in the civil rights movement best known for her pivotal role in the Montgomery bus boycott. The United States Congress has honored her as "the first lady of civil rights" and "the mother of the freedom movement".On December 1, 1955, in Montgomery, Alabama, Parks rejected bus driver James F. Blake's order to vacate a row of four seats in the "colored" section in favor of a White passenger, once the "White" section was filled. Parks was not the first person to resist bus segregation, but the National Association for the Advancement of Colored People (NAACP) believed that she was the best candidate for seeing through a court challenge after her arrest for civil disobedience in violating Alabama segregation laws, and she helped inspire the Black community to boycott the Montgomery buses for over a year. Read more on Wikipedia

Rosa Parks is most famous for refusing to give up her seat on a bus to a white passenger.