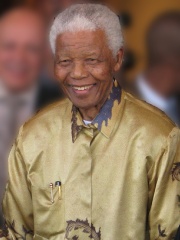 Nelson Rolihlahla Mandela (; Xhosa: [xolíɬaɬa mandɛ̂ːla]; 18 July 1918 – 5 December 2013) was a South African anti-apartheid revolutionary, political leader, and philanthropist who served as President of South Africa from 1994 to 1999. He was the country's first black head of state and the first elected in a fully representative democratic election. His government focused on dismantling the legacy of apartheid by tackling institutionalised racism and fostering racial reconciliation. Read more on Wikipedia

Since 2007, the English Wikipedia page of Nelson Mandela has received more than 19,200,925 page views. His biography is available in 207 different languages on Wikipedia making him the 2nd most popular social activist.