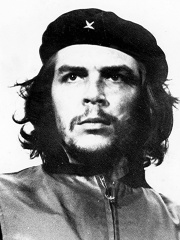 Ernesto "Che" Guevara (Spanish: [ˈtʃe ɣeˈβaɾa]; 14 June 1928 – 9 October 1967) was an Argentine Marxist revolutionary. A major figure of the Cuban Revolution, his stylized visage has become a ubiquitous countercultural symbol of rebellion and global insignia in popular culture.As a young medical student, Guevara traveled throughout South America and was radicalized by the poverty, hunger, and disease he witnessed. His burgeoning desire to help overturn what he saw as the capitalist exploitation of Latin America by the United States prompted his involvement in Guatemala's social reforms under President Jacobo Árbenz, whose eventual CIA-assisted overthrow at the behest of the United Fruit Company solidified Guevara's political ideology. Read more on Wikipedia

Che Guevara is most famous for his role in the Cuban Revolution, which led to the overthrow of Fulgencio Batista and the establishment of a socialist state.