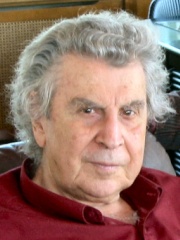 Michail "Mikis" Theodorakis (Greek: Μιχαήλ (Μίκης) Θεοδωράκης [ˈmicis θeoðoˈɾacis]; born 29 July 1925) is a Greek composer and lyricist who has contributed to contemporary Greek music with over 1000 works.He scored for the films Zorba the Greek (1964), Z (1969), and Serpico (1973). He composed the "Mauthausen Trilogy", also known as "The Ballad of Mauthausen", which has been described as the "most beautiful musical work ever written about the Holocaust" and possibly his best work. He is viewed as Greece's best-known living composer. Read more on Wikipedia

Mikis Theodorakis is most famous for his music for the film Zorba the Greek.

Among COMPOSERS In Greece