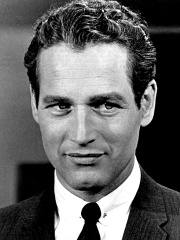 Paul Leonard Newman (January 26, 1925 – September 26, 2008) was an American actor, film director, race car driver, philanthropist, and entrepreneur. He was the recipient of numerous awards, including an Academy Award, a BAFTA Award, three Golden Globe Awards, a Screen Actors Guild Award, a Primetime Emmy Award, a Silver Bear, a Cannes Film Festival Award, and the Jean Hersholt Humanitarian Award.Born in Cleveland Heights, Ohio, a suburb of Cleveland, Newman showed an interest in theater as a child and at age 10 performed in a stage production of Saint George and the Dragon at the Cleveland Play House. He received his Bachelor of Arts degree in drama and economics from Kenyon College in 1949. Read more on Wikipedia

Paul Newman was an American actor, film director, entrepreneur, and philanthropist. He was a co-founder of Newman's Own, a food company from which all after-tax profits are given to charity.

Among actors, Paul Newman ranks 77 out of 9,996. Before him are John Wayne, Judy Garland, Michael Caine, Steve McQueen, Will Smith, and Johnny Depp. After him are Humphrey Bogart, Hedy Lamarr, Robert Redford, Toshiro Mifune, Tom Hanks, and Samuel L. Jackson.