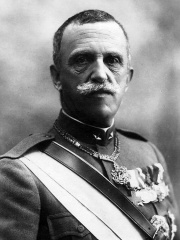 Victor Emmanuel III (Vittorio Emanuele Ferdinando Maria Gennaro di Savoia; Italian: Vittorio Emanuele III, Albanian: Viktor Emanueli III, Amharic: ቪቶርዮ አማኑኤል, romanized: Vītoriyo Āmanu’ēli; 11 November 1869 – 28 December 1947) reigned as King of Italy from 29 July 1900 until his abdication on 9 May 1946. He also reigned as Emperor of Ethiopia (1936–1941) and King of the Albanians (1939–1943). During his reign of nearly 46 years, which began after the assassination of his father Umberto I, the Kingdom of Italy became involved in two world wars. Read more on Wikipedia

Victor Emmanuel III was the King of Italy from 1900 to 1946. He is most famous for leading Italy into World War II and being overthrown by the Italian resistance movement.

Page views of Victor Emmanuel III of Italies by language

Among politicians, Victor Emmanuel III of Italy ranks 340 out of 15,710. Before him are Sokollu Mehmed Pasha, Numa Pompilius, Abdullah of Saudi Arabia, Ali Khamenei, Ahmed III, and Lucius Verus. After him are Pertinax, Baldwin IV of Jerusalem, Alaric I, Mahidevran, Louis II of Hungary, and George V.