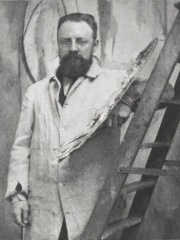 Henri Émile Benoît Matisse (French: [ɑ̃ʁi emil bənwɑ matis]; 31 December 1869 – 3 November 1954) was a French artist, known for both his use of colour and his fluid and original draughtsmanship. He was a draughtsman, printmaker, and sculptor, but is known primarily as a painter. Matisse is commonly regarded, along with Pablo Picasso, as one of the artists who best helped to define the revolutionary developments in the visual arts throughout the opening decades of the twentieth century, responsible for significant developments in painting and sculpture.The intense colorism of the works he painted between 1900 and 1905 brought him notoriety as one of the Fauves (wild beasts). Read more on Wikipedia

Since 2007, the English Wikipedia page of Henri Matisse has received more than 3,704,570 page views. His biography is available in 135 different languages on Wikipedia making him the 19th most popular painter.

Among painters, Henri Matisse ranks 19 out of 1,258. Before him are Edvard Munch, Johannes Vermeer, Sandro Botticelli, Paul Gauguin, Diego Velázquez, and Paul Cézanne. After him are Titian, Gustav Klimt, Donatello, Pieter Bruegel the Elder, El Greco, and Hieronymus Bosch.