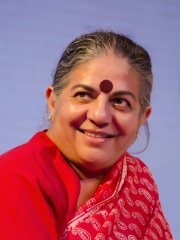 Vandana Shiva (born 5 November 1952) is an Indian scholar, environmental activist, food sovereignty advocate, and anti-globalization author. Shiva, currently based in Delhi, has authored more than twenty books.She is one of the leaders and board members of the International Forum on Globalization (along with Jerry Mander, Ralph Nader, and Jeremy Rifkin), and a figure of the anti-globalization movement. She has argued in favor of many traditional practices, as in her interview in the book Vedic Ecology (by Ranchor Prime). Read more on Wikipedia

Since 2007, the English Wikipedia page of Vandana Shiva has received more than 938,899 page views. Her biography is available in 46 different languages on Wikipedia making her the 202nd most popular social activist.