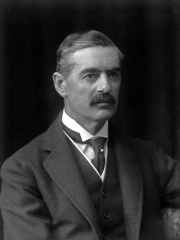 Arthur Neville Chamberlain (; 18 March 1869 – 9 November 1940) was a British Conservative politician who served as Prime Minister of the United Kingdom from May 1937 to May 1940. He is best known for his foreign policy of appeasement, and in particular for his signing of the Munich Agreement on 30 September 1938, conceding the German-speaking Sudetenland region of Czechoslovakia to Germany. Read more on Wikipedia

Since 2007, the English Wikipedia page of Neville Chamberlain has received more than 4,777,833 page views. His biography is available in 80 different languages on Wikipedia making him the 410th most popular politician.

Among politicians, Neville Chamberlain ranks 406 out of 14,801. Before him are Narmer, Philip I of Castile, Severus Alexander, Edward I of England, Frederick III, Holy Roman Emperor, and Charles IV of France. After him are Theodosius II, Henry the Fowler, Louis X of France, Musa I of Mali, Imre Nagy, and Şehzade Bayezid.