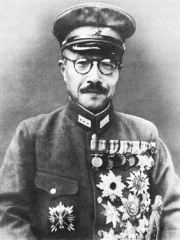 Hideki Tojo (December 30, 1884 – December 23, 1948) was a Japanese politician and general of the Imperial Japanese Army (IJA) who served as Prime Minister of Japan and President of the Imperial Rule Assistance Association for most of World War II. Tojo began his career in the Army in 1905 and steadily rose through the ranks to become a general by 1934. On 1 March 1937, he was promoted to Chief of Staff of the Kwantung Army whereby he led military operations against the Chinese in Inner Mongolia and the Chahar-Suiyan provinces. By July 1940, he was appointed Minister of War to the Japanese government led by Prime Minister Fumimaro Konoe. Read more on Wikipedia

Since 2007, the English Wikipedia page of Hideki Tojo has received more than 3,003,985 page views. His biography is available in 69 different languages on Wikipedia making him the 690th most popular politician.

Among politicians, Hideki Tojo ranks 685 out of 14,801. Before him are Ibn Saud, Merovech, Boudica, Æthelstan, Vladislaus II of Hungary, and Publius Quinctilius Varus. After him are Ahab, Robert Mugabe, Gorm the Old, Maximinus Thrax, Vidkun Quisling, and Umberto II of Italy.