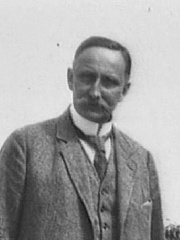 Karl Ernst Haushofer (27 August 1869 – 10 March 1946) was a German general, professor, geographer, and politician. Through his student Rudolf Hess, Haushofer's conception of Geopolitik influenced the development of Adolf Hitler's expansionist strategies. He coined the political use of the term Lebensraum, which Hitler adopted in Mein Kampf and used to motivate global Nazi expansionism and genocide. Read more on Wikipedia

Karl Haushofer was a German general and geopolitician who is most famous for his geopolitical theories.

Among politicians, Karl Haushofer ranks 1,144 out of 15,710. Before him are Emperor Wen of Sui, Tokhtamysh, Aristide Briand, As-Saffah, Valdemar I of Denmark, and Jim Mattis. After him are Rashid-al-Din Hamadani, Damocles, False Dmitry I, Anna of Austria, Queen of Spain, Gustav Stresemann, and Süleyman Demirel.