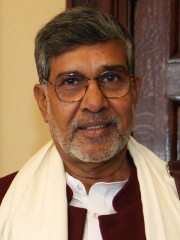 Kailash Satyarthi (born 11 January 1954) is an Indian social reformer who campaigned against child labour in India and advocated the universal right to education. In 2014, he was the co-recipient of the Nobel Peace Prize, along with Malala Yousafzai, “for their struggle against the suppression of children and young people and for the right of all children to education.” He is the founder of multiple social activist organizations, including Bachpan Bachao Andolan, Global March Against Child Labour, Global Campaign for Education and Kailash Satyarthi Children's Foundation. Kailash Satyarthi and his team at Bachpan Bachao Andolan have liberated more than 81,000 children in India from child labour, slavery and trafficking. Read more on Wikipedia

Since 2007, the English Wikipedia page of Kailash Satyarthi has received more than 1,858,469 page views. His biography is available in 65 different languages on Wikipedia making him the 187th most popular social activist.