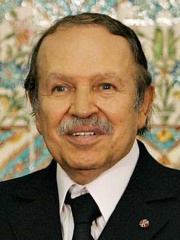 Abdelaziz Bouteflika (pronunciation ; Arabic: عبد العزيز بوتفليقة‎, romanized: ʿAbd al-ʿAzīz Būtaflīqa [ʕabd el-ʕaziːz buːtefliːqa]; born 2 March 1937) is an Algerian politician who served as President of Algeria for almost 20 years, from 1999 to his resignation in 2019. As President, he presided over the end of the bloody Algerian Civil War in 2002 when he took over the project of Liamine Zéroual (previous president), and he ended emergency rule in February 2011 amidst regional unrest. Read more on Wikipedia

Abdelaziz Bouteflika is most famous for being the president of Algeria for 20 years.

Among politicians, Abdelaziz Bouteflika ranks 1,167 out of 15,710. Before him are Cnut the Great, Frederick III, Elector of Saxony, Martti Ahtisaari, Ptolemy V Epiphanes, Takeda Shingen, and William II of the Netherlands. After him are Justin II, Afonso V of Portugal, Asa of Judah, Eric XIV of Sweden, Camille Desmoulins, and Talaat Pasha.