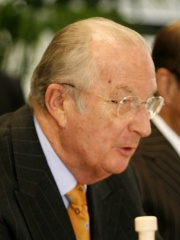 Albert II (born 6 June 1934) is a member of the Belgian royal family who reigned as King of the Belgians from 9 August 1993 to 21 July 2013. Albert II is the son of King Leopold III and the last living child of Queen Astrid, born a princess of Sweden. He is the younger brother of the late Grand Duchess Joséphine-Charlotte of Luxembourg and King Baudouin, whom he succeeded upon Baudouin's death in 1993. Read more on Wikipedia

Albert II of Belgium is most famous for being the current King of Belgium. He is the eldest son of King Albert I and Queen Elizabeth of Belgium.

Page views of Albert II of Belgiums by language

Among politicians, Albert II of Belgium ranks 420 out of 15,577. Before him are Yongle Emperor, Oleg of Novgorod, José Mujica, Matthias, Holy Roman Emperor, George II of Great Britain, and Severus Alexander. After him are Henry the Fowler, Charles I of England, Carl Gustaf Emil Mannerheim, Jeongjo of Joseon, Toyotomi Hideyoshi, and Rurik.