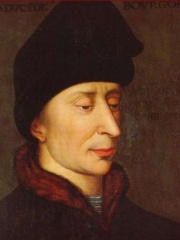 John I (French: Jean sans Peur ; Dutch: Jan zonder Vrees; 28 May 1371 – 10 September 1419) was a scion of the French royal family who ruled the Burgundian State from 1404 until his death in 1419. He played a key role in French national affairs during the early 15th century, particularly in the struggles to rule the country for the mentally ill King Charles VI, his cousin, and the Hundred Years' War with England. Read more on Wikipedia

John the Fearless was the Duke of Burgundy from 1404 to 1419. He was most famous for his military accomplishments during the Hundred Years' War.

Page views of John the Fearlesses by language

Among politicians, John the Fearless ranks 731 out of 15,710. Before him are Cao Pi, James Monroe, Wilhelm, German Crown Prince, Chlothar I, Marcus Aemilius Lepidus, and Alexandra of Denmark. After him are Hussein of Jordan, Hugo Chávez, Boudica, Publius Quinctilius Varus, Ngo Dinh Diem, and Alexis of Russia.

Among people born in 1371, John the Fearless ranks 1. After him are Mary, Queen of Hungary, Vasily I of Moscow, Valentina Visconti, Duchess of Orléans, Frederick I, Elector of Brandenburg, Pierre Cauchon, Leopold IV, Duke of Austria, Sophia of Lithuania, and Shō Hashi. Among people deceased in 1419, John the Fearless ranks 2. Before him is Antipope John XXIII. After him are Wenceslaus IV of Bohemia, Jeongjong of Joseon, Vincent Ferrer, Je Tsongkhapa, Jobst of Moravia, and Edigu.