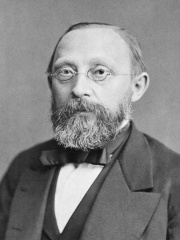 Rudolf Ludwig Carl Virchow (; German: [ˈfɪʁço] or [ˈvɪʁço]; 13 October 1821 – 5 September 1902) was a German physician, anthropologist, pathologist, prehistorian, biologist, writer, editor, and politician. He is known as "the father of modern pathology" and as the founder of social medicine, and to his colleagues, the "Pope of medicine".Virchow studied medicine at the Friedrich Wilhelm University under Johannes Peter Müller. While working at the Charité hospital, his investigation of the 1847–1848 typhus epidemic in Upper Silesia laid the foundation for public health in Germany, and paved his political and social careers. Read more on Wikipedia

Rudolf Virchow is most famous for his cell theory which states that cells are the basic unit of life. He also believed that disease is caused by changes in cells.

Among PHYSICIANS In Poland