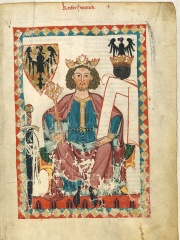 Henry VI (Heinrich VI) (November 1165 – 28 September 1197), a member of the Hohenstaufen dynasty, was King of Germany (King of the Romans) from 1169 and Holy Roman Emperor from 1191 until his death. From 1194 he was also King of Sicily. He was the second son of Emperor Frederick Barbarossa and his consort Beatrix of Burgundy. Read more on Wikipedia

Among politicians, Henry VI, Holy Roman Emperor ranks 666 out of 15,710. Before him are Vladislaus II of Hungary, Gwangjong of Goryeo, Robert Gascoyne-Cecil, 3rd Marquess of Salisbury, Gaius Cassius Longinus, Farah Pahlavi, and Sweyn Forkbeard. After him are George Marshall, Henry I of France, Sennacherib, Abd al-Rahman III, Princess Sophie of Bavaria, and Gordian I.

Among people born in 1165, Henry VI, Holy Roman Emperor ranks 3. Before him are Philip II of France and Ibn Arabi. After him are Simon de Montfort, 5th Earl of Leicester, Berengaria of Navarre, Albert of Riga, Henry I, Duke of Brabant, Joan of England, Queen of Sicily, Raimbaut de Vaqueiras, Waleran III, Duke of Limburg, Jean Bodel, and Vukan Nemanjić. Among people deceased in 1197, Henry VI, Holy Roman Emperor ranks 1. After him are Henry II, Count of Champagne, Margaret of France, Queen of England and Hungary, Peter II of Bulgaria, Saint Homobonus, Bretislav III, Gertrude of Bavaria, and Rhys ap Gruffydd.