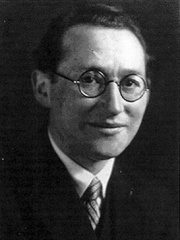 Kurt Lewin ( lə-VEEN; 9 September 1890 – 12 February 1947) was a German-American psychologist, known as one of the modern pioneers of social, organizational, and applied psychology in the United States. During his professional career Lewin applied himself to three general topics: applied research, action research, and group communication. Lewin is often recognized as the "founder of social psychology" and was one of the first to study group dynamics and organizational development. Read more on Wikipedia

Since 2007, the English Wikipedia page of Kurt Lewin has received more than 1,006,245 page views. His biography is available in 51 different languages on Wikipedia (up from 48 in 2019). Kurt Lewin is the 18th most popular psychologist (up from 20th in 2019), the 32nd most popular biography from Poland (down from 31st in 2019) and the most popular Polish Psychologist.

Kurt Lewin is most famous for his work on group dynamics and organizational psychology. He is also known for the Lewin-Erickson theory of personality, which is a social-psychological theory that deals with the interaction between the person and the environment.

Among psychologists, Kurt Lewin ranks 18 out of 183. Before him are Erik Erikson, Viktor Frankl, Carl Rogers, Gustave Le Bon, Albert Bandura, and John B. Watson. After him are B. F. Skinner, Edward Thorndike, Melanie Klein, Anna Freud, Daniel Kahneman, and Wilhelm Reich.

Among PSYCHOLOGISTS In Poland