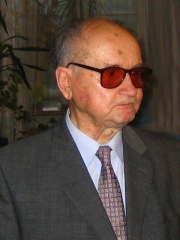 Wojciech Witold Jaruzelski (Polish: [ˈvɔjt͡ɕɛɣ ˈvitɔlt jaruˈzɛlskʲi] (listen); 6 July 1923 – 25 May 2014) was a Polish military officer, politician and de facto leader of the Polish People's Republic from 1981 until 1989. He was the First Secretary of the Polish United Workers' Party between 1981 and 1989, making him the last leader of the Polish People's Republic. Jaruzelski served as Prime Minister from 1981 to 1985, the Chairman of the Council of State from 1985 to 1989 and briefly as President of Poland from 1989 to 1990, when the office of President was restored after 37 years. Read more on Wikipedia

Wojciech Jaruzelski was the president of Poland from 1981 to 1989. He is most famous for his imposition of martial law in 1981, which was a response to the rise of the Solidarity movement.

Among politicians, Wojciech Jaruzelski ranks 893 out of 15,577. Before him are Anastasius I Dicorus, Diane de Poitiers, Prince Andrew of Greece and Denmark, Thutmose II, Antigonus I Monophthalmus, and Lutz Graf Schwerin von Krosigk. After him are Olaf Tryggvason, Aristides, Faisal of Saudi Arabia, Mindaugas, Sneferu, and Amenhotep II.