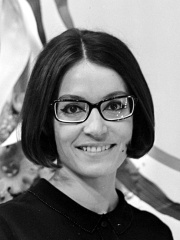 Ioanna "Nana" Mouskouri (Greek: Ιωάννα "Νάνα" Μούσχουρη [i.oˈana ˈnana ˈmusxuri]) (born 13 October 1934) is a Greek singer. Over the span of her career, she has released over 200 albums in at least twelve languages, including Greek, French, English, German, Dutch, Portuguese, Italian, Japanese, Spanish, Hebrew, Welsh, Mandarin Chinese and Corsican.Mouskouri became well known throughout Europe for the song "The White Rose of Athens", recorded first in German as "Weiße Rosen aus Athen" as an adaptation of her Greek song "Σαν σφυρίξεις τρείς φορές" (San sfyríxeis tris forés, "When you whistle three times"). It became her first record to sell over one million copies.Later in 1963, she represented Luxembourg at the Eurovision Song Contest with the song "À force de prier". Read more on Wikipedia

Nana Mouskouri is most famous for her singing.