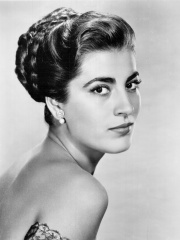 Irene Papas (or Pappas; Greek: Ειρήνη Παππά, romanized: Eiríni Pappá, IPA: [iˈrini paˈpa]; born according to most sources on 3 September 1926) is a Greek actress and singer who has starred in over 70 films in a career spanning more than 50 years. She gained international recognition through such popular award-winning films as The Guns of Navarone (1961) and Zorba the Greek (1964). She was a powerful protagonist in films including The Trojan Women (1971) and Iphigenia (1977). Read more on Wikipedia

Irene Papas is most famous for her role as the Greek goddess Aphrodite in the 1968 film, "Clash of the Titans."

Among ACTORS In Greece