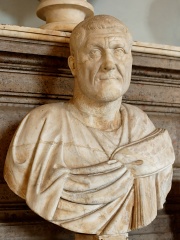 Gaius Julius Verus Maximinus "Thrax" ("the Thracian"; c. 173 – 238) was Roman emperor from 235 to 238. His father was an accountant in the governor's office and sprang from ancestors who were Carpi (a Dacian tribe), a people whom Diocletian would eventually drive from their ancient abode (in Dacia) and transfer to Pannonia. Maximinus was the commander of the Legio IV Italica when Severus Alexander was assassinated by his own troops in 235. Read more on Wikipedia

Maximinus Thrax was a Roman Emperor from 235 to 238. He is most famous for being the first emperor to be born outside of Italy, and for his persecution of Christians in the empire.

Among politicians, Maximinus Thrax ranks 634 out of 15,710. Before him are Franjo Tuđman, Diane de Poitiers, Peleus, Charles I of Anjou, Manuel I of Portugal, and Christian II of Denmark. After him are Michael of Russia, Tigranes the Great, Margaret of Austria, Duchess of Savoy, Michel Aoun, Conrad III of Germany, and Maximilian II, Holy Roman Emperor.