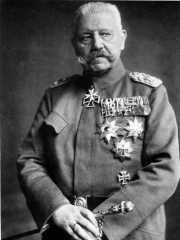 Paul Ludwig Hans Anton von Beneckendorff und von Hindenburg (pronounced [ˈpaʊl ˈluːtvɪç hans ˈantoːn fɔn ˈbɛnəkn̩dɔʁf ʔʊnt fɔn ˈhɪndn̩bʊʁk] (listen); abbreviated pronounced [ˈpaʊl fɔn ˈhɪndn̩bʊʁk] (listen); 2 October 1847 – 2 August 1934) was a German field marshal and statesman who led the Imperial German Army during World War I. He later became President of Germany from 1925 and held the position until his death. During his presidency, he played a key role in the Nazi seizure of power in January 1933 when, under pressure from his advisers, he appointed Adolf Hitler as Chancellor of Germany. Hindenburg was born to a family of minor Prussian nobility in Posen. Read more on Wikipedia

Paul von Hindenburg was a German field marshal who became the first President of Germany in 1925. He is most famous for being the commander of the German army during World War I.

Among politicians, Paul von Hindenburg ranks 154 out of 15,577. Before him are Ferdinand I, Holy Roman Emperor, Oliver Cromwell, Simón Bolívar, Cardinal Richelieu, Lech Wałęsa, and Maximilien Robespierre. After him are Gustavus Adolphus of Sweden, Alfred the Great, Louis IX of France, Charles VI, Holy Roman Emperor, Ivar the Boneless, and Darius III.